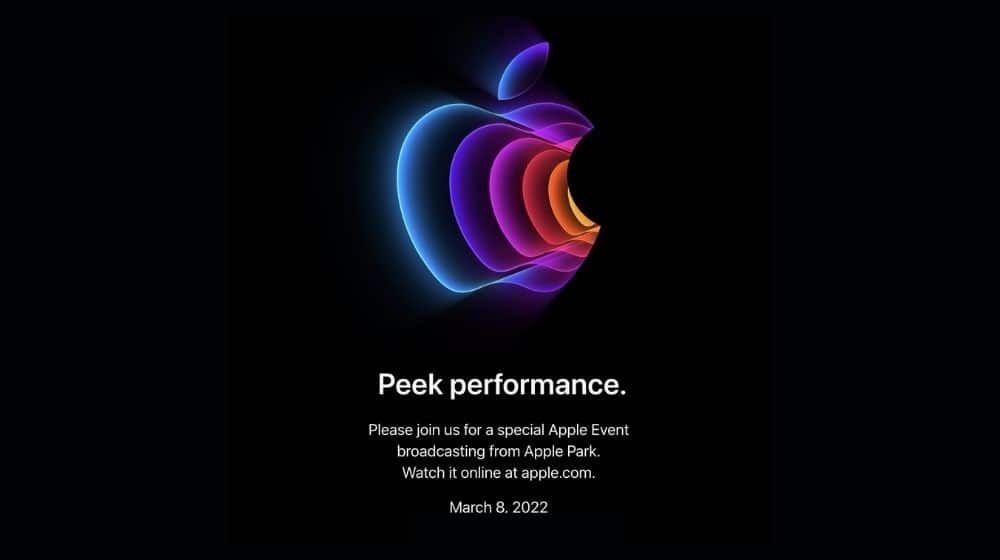 In the end, Apple has confirmed that it will hold its next online event on March 8th. Public invitation: Greg Joswiak, the Senior Vice President of Marketing, put up an invitation with the words “peek performance” and a multi-colored Apple logo on it, so people could come to the event.

Many people think that the multi-colored logo may show the colors of the new device.

The event will start at 1 PM Eastern Time / 10 AM Pacific Time / 11 PM in Pakistan. Further information about the event has not been made public yet, but we will soon.

Bloomberg’s Mark Gurman said earlier that the company may be planning to make an iPhone SE that is more affordable. It would have 5G connectivity, a faster A15 CPU, and better cameras. The low-cost smartphone might have the same look as the iPhone SE, and it might have the same Touch ID.

Gurman also said in his newsletter, Power On, that Apple will show off the iPad Air, which is expected to have a new CPU and be able to use 5G.

iPhones and iPads that use Face ID could also be unlocked while the user is wearing a face mask in iOS 15.4. Users will also be able to use the same keyboard and mouse on multiple iPads and Macs when the new update comes out.

There are a lot of other products that Apple is likely to show off later this year, like a Mac with Apple-designed chips and a new iPhone series.