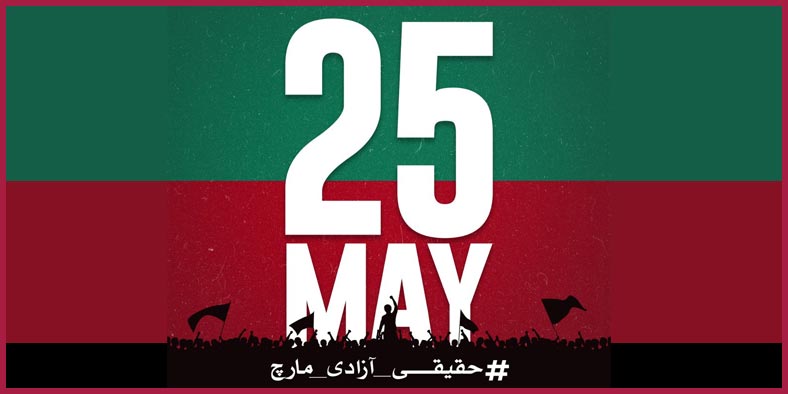 After chairing a meeting of the PTI’s core committee, Imran Khan announced the date of his long march. PTI Chairman Imran Khan said on Sunday that his much-anticipated long march, the “Azadi March,” will arrive in Islamabad on May 25, and requested his supporters to meet him at 3 p.m. on the Srinagar Highway in the federal capital.

Khan made the remark after concluding a meeting of the PTI’s core committee at a press conference in Peshawar. Several party leaders flanked the former prime minister, including Shah Mahmood Qureshi and Mahmood Khan. Later, he told his supporters on Twitter that he wanted the “entire nation” to come to Islamabad, and that he would lead the long march from Peshawar.

During the news conference, Khan sought a new election date as well as the dissolution of the legislatures. He also issued a message to the country’s military, urging it to keep its “neutrality” vow. He suggested that people from all areas of life, particularly women, should join his long march, and that he will stay in Islamabad for as long as he is needed.

“We are willing to die for our nation, but we will never allow these thieves controlling it,” he stated. “We require a date for new elections and the dissolution of the legislatures.”

The PTI, according to the former prime minister, has always been a peaceful party that has “never instigated violence or disruption.”

“This isn’t about politics; it’s about jihad (holy war). It would be illegal for them [the government] to try to stop the long march, and we will take legal action if that happens.”

‘The most crooked individuals rose to prominence.’

Khan began his press conference by praising the progress his government did during its reign and criticizing the current administration for pushing the country into bankruptcy.

He went on to say that a US-backed plot, “hatched with the connivance of the most corrupt persons,” was successful in deposing him and bringing him to power.

Khan claimed he first learnt about the “plot” in June of last year and that he had been working hard to stop it, but that his efforts had failed.

“This plot was not hatched against me; it was hatched against Pakistan,” he added, adding that his government was ousted at a time when the country was making exceptional progress in terms of, among other things, industrial growth and a record-breaking increase in GDP (GDP).

He then discussed how his government battled the coronavirus outbreak and led the country out of catastrophe, for which the “entire globe praised Pakistan.”

The former prime minister then went on to criticize the current government, claiming that while “it was claimed that the leaders of the coalition parties were very experienced people” in terms of governance, it turned out that they were “only experienced in corruption, hiding corruption cases, and seeking revenge against their opponents.”

“Their experience is reflected in the rupee falling, the stock market collapsing, and inflation soaring,” he continued.

He claimed that the government had “no strategies, no roadmaps, and was unable to make choices out of fear,” to the point where it needed the National Security Council’s (NSC) help to establish petroleum product prices.

“The government is making such demands so that the Pakistan Army will have to bear the brunt of the difficult decisions so that it may get away with it.”

Khan went on to allege that a “convict, fugitive” was making decisions concerning Pakistan while sitting in London, and that 60 percent of Parliament was on bail.